Randomly today, I heard from two male friends who are new to Bikram. Maybe it was the full moon last night, or all the love and positive energy in the LAX air surrounding next week's end to our nine weeks of enlightenment, but whatever the case, I was so touched and inspired by the following email message I received from a former colleague of mine at SL Green. He is no longer with the firm, and shall remain nameless....here is what he wrote:

"Wanted you to know after watching your updates I just signed up for a
month of bikram, will see how it goes once i get a chance to start it. how are things?
I guess your site says it all!"

This message, in addition to hearing from Motie today, who did his third class solo (meaning without me) at the Agoura Hills Bikram Studio, makes my nine weeks worthy. Both friends have struggled with back pain and even surgery to resolve the pain. I know they will find relief and experience new beginnings though yoga. Thank you my friends for sharing your stories and soon your practices with me.

Ironically, today was one of the LEAST inspiring days on the Bikram Yoga College of India front. This morning's yoga class was cold and uninspiring. I HATE COLD CLASSES, as much as Bikram "hates lazy people!"

This afternoon's lecture was the worst so far (repetitive topic - spine, spine, spine! Yes, we get it. It's all about our spines!) And even the Boss Man himself, was out of sorts teaching the evening class. He blamed his low energy mode on the bad East Coast weather, having just returned from lecturing at Harvard University. Harvard Medical/Research is now devoting its resources to the study of Bikram Yoga Therapy as it relates to medicine....hopefully the rest of the world will catch on now too.

Raj's brother, who's the head of Gynecology at UCLA, spoke about fertility tonight in a broad sense, but it was nothing I didn't already know. Obviously, if your mind is more tranquil through the practice of yoga, you will have an easier time getting pregnant. At least he was comedic! Apparently Raj ties this all into her pregnancy lecture(s) which we've yet to have.

Bikram made the movie tonight optional, so I took a pass and drove my Yoga Sister, Rachael to CVS so she could get some much needed cold supplies. After being a mom and a sister to all of us for eight weeks, it all caught up to her and now it's time for us to take care of her!

Rach - if it wasn't for your presence next door and your magical coffee, I would not have made it this far. I certainly wouldn't be up right now writing. I love you sister!

As Rachael and I pulled into the Radisson tonight, we recited our memorable Bikram quotes of the day. Mine was in relation to Bikram's commentary on the crappy Boston weather. He said, "see this is why I don't like the East Coast. My nose close, my throat close and my ass close...!"

As we reminisced on the day's highs and lows, we stumbled upon Bikram's one of a kind Rolls in the driveway. Yes, another Vintage Rolls people! He has 40 something of them.... 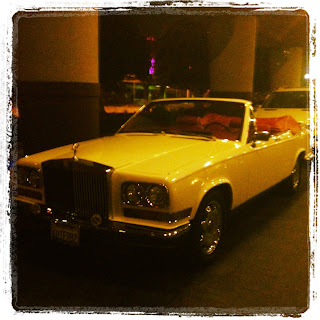 Rachael said, "we might be complaining, but Bikram's laughing all the way to the bank."