From India with Love

Today I met my guru, Bikram Choudhury and all I can say is he's just as crazy, dynamic, egotistical and no-holds-barred as everyone promised he would be, but I went into his lecture today with a different approach....I pretended I never knew of him or had any preconceived notions about him.  It was much more fun that way and it's the way we all should look at the world, but I'm not ready to go that deep yet, so bear with me.

His 1-hour lecture felt about 10 minutes long, to give you a sense of how engaging this man is.  Beyond learning that he spent all the money he made off of our training at Harrods in London (on Swarovski encrusted platform shoes), I also embraced and took interest in the following:

- Poison kills the poison; in other words, pain kills the pain. We all have ailments that can be healed with work. When western medical science stops, Bikram's yoga science starts for a lot of us, myself included.  As a lot of you know, I suffer from a badly blown disc in my cervical spine.  It has deteriorated to the tune of "you must do surgery," from my orthopedic surgeon.  With Bikram and acupuncture in my life, I know now that surgery is not the only option, it's actually the last thing I want  or need to do right now. If you didn't already know this, Bikram broke his knee in 1964 in a horrendous weight lifting accident. His doctors wanted to sever his leg and told him he would never walk again. Bikram contemplated suicide at the time because for a macho guy like him, that seemed like a better option than living life as a crippled person. But he took a different path with his own guru and while all the doctors who advised him in the 60's are long dead, Bikram is alive and kicking and jumping and walking and fit beyond fit, so let's start from there....

- "The New School" - that's where I am people.   In this University, we don't follow the world, the world follows us.  We all deal with the pain from practicing yoga together. The pain is the same for everyone. It's the practice of Bikram that makes us feel human, but there is a major road block that all of the trainees and I are looking to get past - our minds.  "Mind is the #1 enemy!" Over the next 9 weeks, I will be working towards using my body as a medium to keep my mind in my brain, the only place it should be.  (more to follow on this topic later)

- Yoga is a marriage of body, mind and spirit.  While 77% of marriages in the United States fail, yoga marriage is forever, if you make the connection between the 3 elements. What Bikram teaches us is humanity and spiritualism, plain and simple.  He's not trying to be something he's not, nor is his practice, hence the simplified nature of 26 postures taught exactly the same way, in exactly the same order, in exactly the same temperature (give or take).

- Negative energy is 9 times more positive than positive energy, think about it.  We all need to be our own warriors to protect ourselves and our loved ones. "English Bulldog Determination!!"

- Last but not least, consider this....famous celebrities, all the ones we love (Marilyn, Elvis, Jim Morrison, JFK, etc.) all died young. They didn't take care of themselves, they weren't their own #1's.  They lived for others and lived on "crutches" to ease their pain. Yogis never die. Death comes to yogis only when they are ready; only when they want to.  It's pretty powerful.... 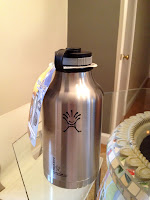 I have only one thing to say about the 5 o'clock class tonight taught by Bikram.....I enjoyed him much more as a lecturer when he wasn't killing me softly with his song....no joke, he actually sang that tonight in class, along with his other chart toppers in India. This man has done it and seen it all. He broke us all down, one by one. It was the hardest, hottest, most inspiring, energetic, vulgar and emotional class I ever took. I stayed in the room unlike some of my fellow trainees, so I'm pumped about that! I feel like I'm in Yoga Kindergarten, starting from scratch. Aren't we all most days? I was able to share my abundance of ice cold water (thank you 64oz Hydro flask, see right image) during class with a friend, in exchange for some electrolytes that he had. We all need to lean on others at times and I am grateful for my new buddy. As of tonight, we are stocked and ready to jump into the "big ocean" head first tomorrow.
Posted by Melissa Libner at 10:01 PM